A constellation of energies held by Radiodress, Greg Staats, and Syrus Marcus Ware, with vibrational cuts by Johnson Ngo

We have changed. In this, the third iteration of the Centre for Incidental Activisms (CIA), things certainly don’t look the same as they did five years ago.

Five years ago we set out to performatively examine a question at stake in contemporary artistic and curatorial practice. Instead of creating an exhibition about politically engaged and activist practices, we created a centre through which to enact politics and embrace activism.

This was a start. Disagreement, uncertainty, and unpredictability kept us going, enthusiastically. We are curious. We then looked to collaboration across disciplines and practices – from choreography to publishing to spoken word to dance to architecture and object play – to understand how new techniques might improvise a different scenario inside the gallery space and loosen the distinctions in-between the genres of our programming: no more education separate from exhibition making separate from public programming separate from publications. And then we realized it wasn’t about space at all, but the gallery itself. As much as anything, the AGYU was the subject of the CIA. The artists and communities with which we were working on each new iteration of the CIA were transforming us. And transforming our relationship to the university: cross-disciplinary skype conversations in the gallery, class meetings, formal and informal symposia connected to curriculum at YorkU. Students used the gallery as a studio in the second iteration, which also brought classes from OCADU, Ryerson, and Sheridan. Activism and collaboration as an end goal certainly brought a new time-sense to the gallery. It changed how we conceived our programming, in the long term. We changed out-reach to in-reach. We made a score instead of an exhibition. And we have followed its movement henceforth.

The CIA was always about putting research on display. The artists’ and our own.

We began each edition of this project with physical supports that shaped our propositions. In 2011, for the inaugural CIA, it was a large, custom-designed table positioned in the middle of the gallery. It was an organizational device that acted as a site and a meeting place, highlighting the questions we thought this project was about: “who is sitting at the table;” “who is stepping up to the table” (e.g., who has access and who is brokering these decisions in relation to the structure of the gallery)? But it also acted as a platform for different kinds of activities—from talks, to workshops, to dinners, to classes that professors conducted in the space, to being a stage for spoken word events and performances—and, in the end, through Public Studio’s intervention, the symbolic destruction of the idea of the “gallery” and the project’s very concept itself by cutting the table into pieces and rearranging it throughout the space. This is what the CIA taught us.

2014. We learned. Our 10’ diameter rotating table was low to the ground. In the back space, a quiet room. The table was a surface for collaboration, co-authorship, and exchange – a platform that brought the various collaborators, from members of the downtown art community to members of the Jane-Finch community, into the fold. There was spoken word, collage parties, collective writing exercises, think-tanks, and feasts. The 16’ library carrel, in the back gallery space, was a place of reflection, to reflect upon the activities taking place in the front gallery in real time and not after the project was finished. It also functioned as a physical drop box—a way to share research, with each other and the public. We understood these projects never finish. Especially when the focus turns to possibilities inherent in collective (and, occasionally, anonymous) authorship. Documentation became primary, source material deprecated. The result: ephemera flooded the gallery.

We have built a dock and a series of piers as our proposition. We’ve learnt. This time, change is anticipated. Mutable forms are the beginning. This time, the proposition follows the artists’ proposals. The piers start moored to the dock. They might start out there but they won’t end up there. This is another material metaphor for the project.

Did we mention the crates? They are back in the front gallery, forming a wall, dissecting the space. They too are meant to move, building new structures to put things in, to place things on, to hide things, to reveal. They too can be piled whether on themselves or on a pier. The piers and the crates and the docks can do other things too. They can bridge, which is convenient because these artists are experts in bridging. Bridging communities. Cultural practices. Genres. Or rituals, or ceremonial processes, or reciprocities, or transmissions, or actions. 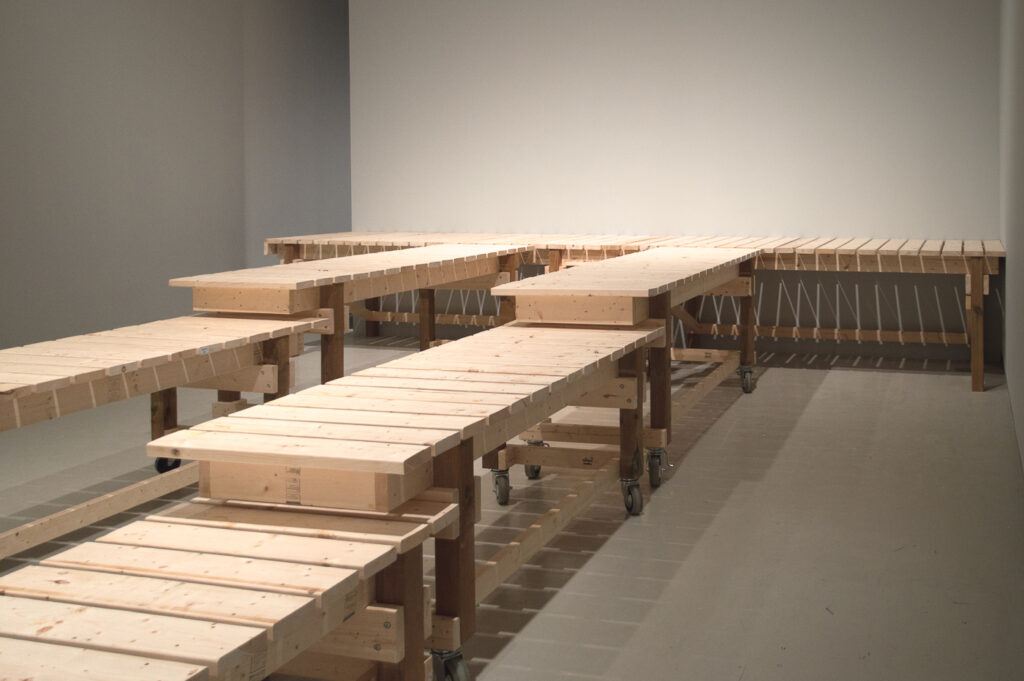 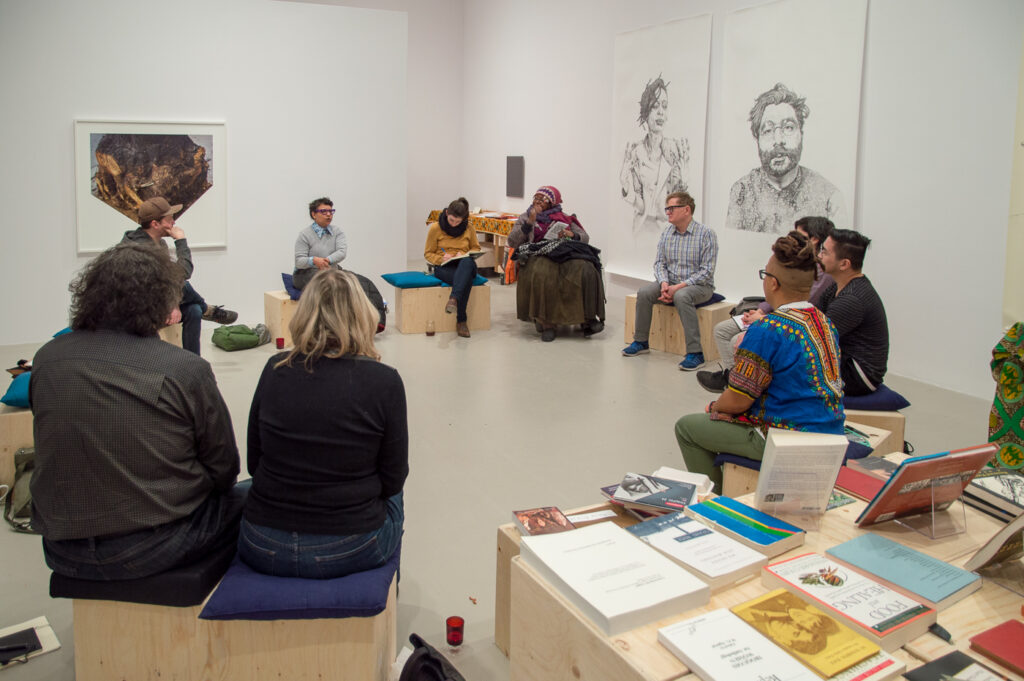 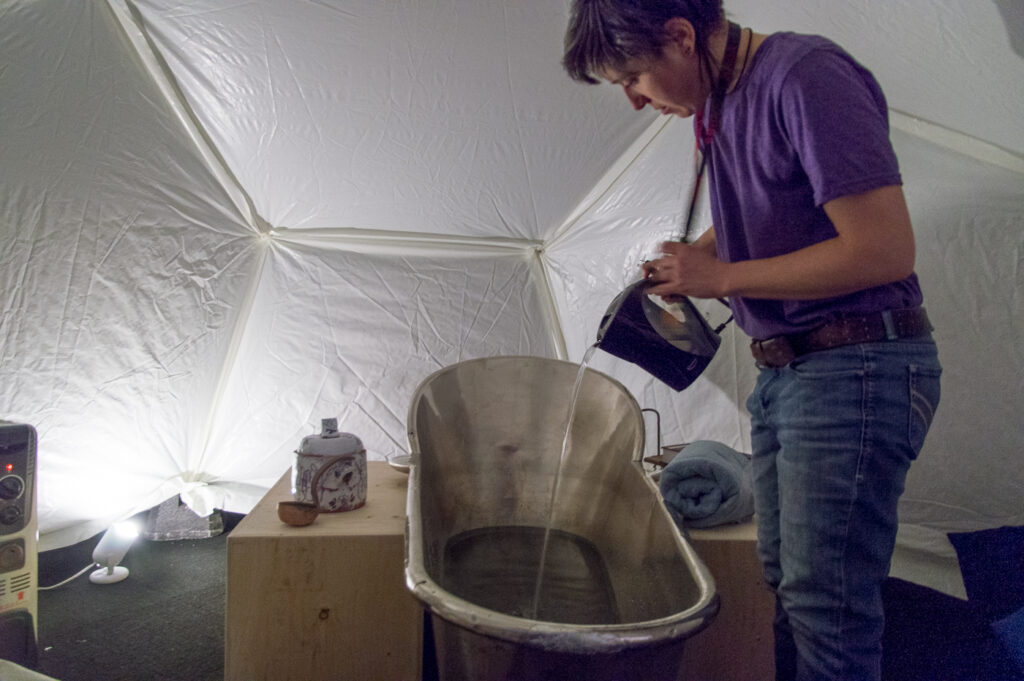 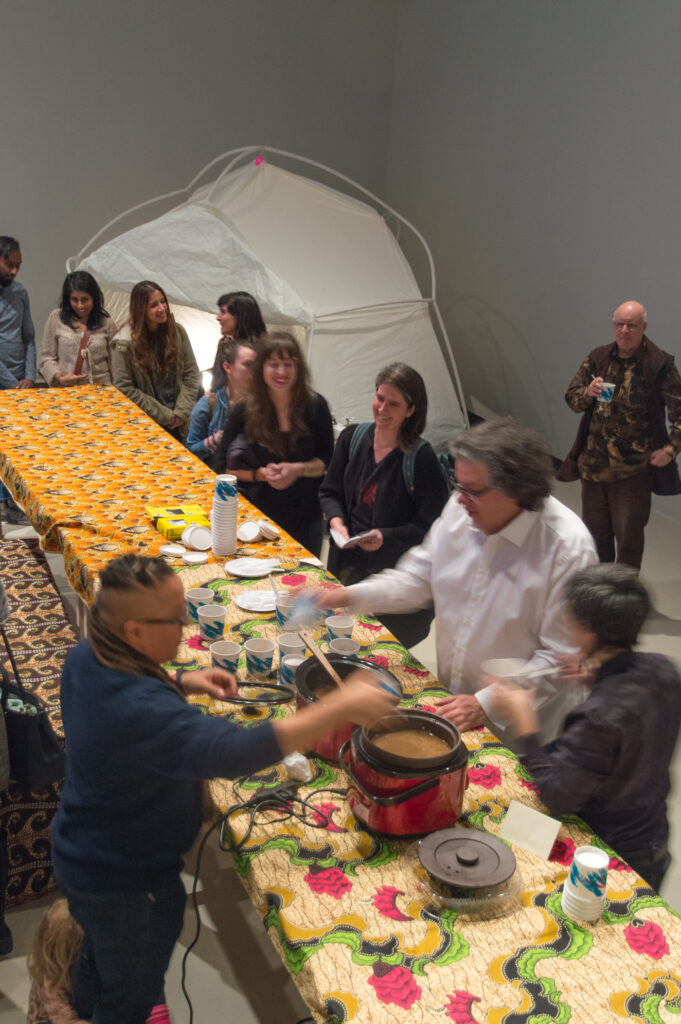 For this iteration, the artists are bringing a grassroots approach to sharing information and community healing. CIA #3 focuses on the importance of ritual and shared cultural traditions to interrogate and build new knowledge structures while simultaneously recuperating and reinventing these techniques and traditions. The artists mine family archives and cultural histories bringing forward sacred symbols and mnemonic devices to construct portraits and uncover new narratives.

These narratives run in real time. A continuous present. They run like water but are as sturdy as land.

The CIA #3 is a rehearsal space for the artists to build on their existing work and explore the nuances of their complex practices, perhaps finding pathways into each others’ future projects or meeting new collaborators at the intersection of cultural crossroads.

Radiodress (aka Reena Katz) leads ritual baths, Mikvot, all the while with an embodied awareness of the colonial footprint on our local water sources. Reframing a traditional ritual for bodies marked outside the frame. It is a contemporary tradition she is co-creating. She is curious about the role “queer orientations” might have to offer civic life. She offers MKV as a comforting and transformative marker of life shifts, specifically for queer and trans-identified people. Radiodress’ project sits at the threshold of the gallery space and the outside world, and, by bringing people one-by-one to the CIA #3 as part of the project, brings the Greater Toronto area to YorkU’s campus. Connections proliferate. Ritual sounds are returned to the gallery through a meandering system of audio vibrations. And healing enters the gallery space as a form of renewal and generosity. MKV is a powerful ceremony and offering to community, acknowledging the physical toll that our work takes on marginalized bodies in our culture.

Greg Staats unpacks Onkwehonwe civilization. His research includes the restraint/constraint of cultural behaviour from the personal to the land-based remnants of memory and phenomena. Looking from above, with aerial views of the land gleaned from the Ontario Archives, he catalogues his history and implicates us in its current narrative. Making connections with the Aboriginal Student Association, the Department of Photography, and inviting members of the Six Nations of the Grand River Territory into the CIA #3, he uses the university as source material to share knowledge and guide performances that move from condolence to renewal. Working on written and photo-based/video works, this transition-transmission encompasses a gestural language as well, based on a personal condolence/renewal-restorative aesthetic that his work has evolved over the years. Piers become work spaces and boxes contain information to be shared.

Syrus Marcus Ware brings the classroom into the gallery by drawing on a YorkU course he’s teaching this semester. He hosts break-out sessions in the CIA #3, using the piers as seating arrangements, always re-arranging. These sessions explore environmental justice, prisoners’ justice and abolition-based activism, and the experiences of black and trans activists in Ontario. Considering memory both a distant/near-future and an homage/celebration of the lives of activists, Syrus moves his love-letters-to-activists project/performance in new directions, adding to his growing archive of drawings of those activists who come to the gallery to engage with the CIA #3. As the CIA #3 progresses, Syrus weaves together his large-scale portraiture, newly created soundscapes, and an ongoing speculative fiction text, continuing his long-standing practice of experimental pedagogy and movement building now as experiential-immersive installation.

Collaborations proliferate. Inter-connectedly. Already the artists approach their work through collaboration—with ideas, processes, and other people. And the sharing of skills, knowledge, and evidence collected over the course of the CIA #3 means that co-creation happens in-between their practices and projects as well, making new works together as the organic culmination-continuum of sharing the space and clarifying the terms used in relation to their practices.

This is the final iteration of the CIA. As we move forward we question what it takes to continue. How do we ensure that galleries might also be safe spaces for exchange, sociality, and activism? And that the AGYU continues to learn from the teachings of the CIA and the artists and communities that have taken up its propositions?

How do we move from grieving into dreaming into action?
These are questions for the future.
We dive off the pier into unknown waters. 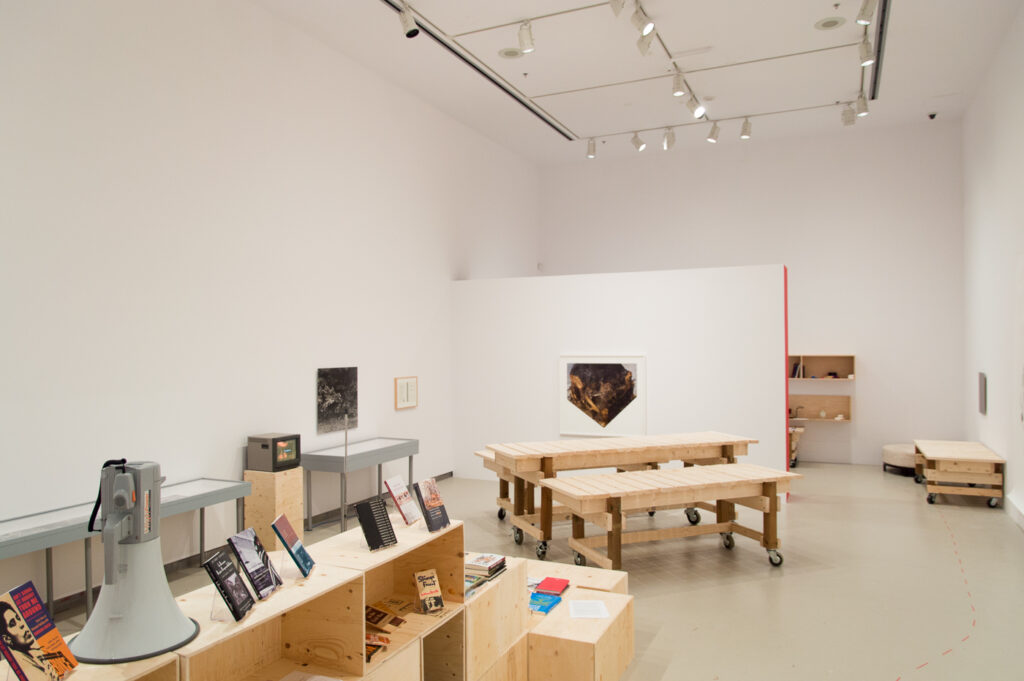 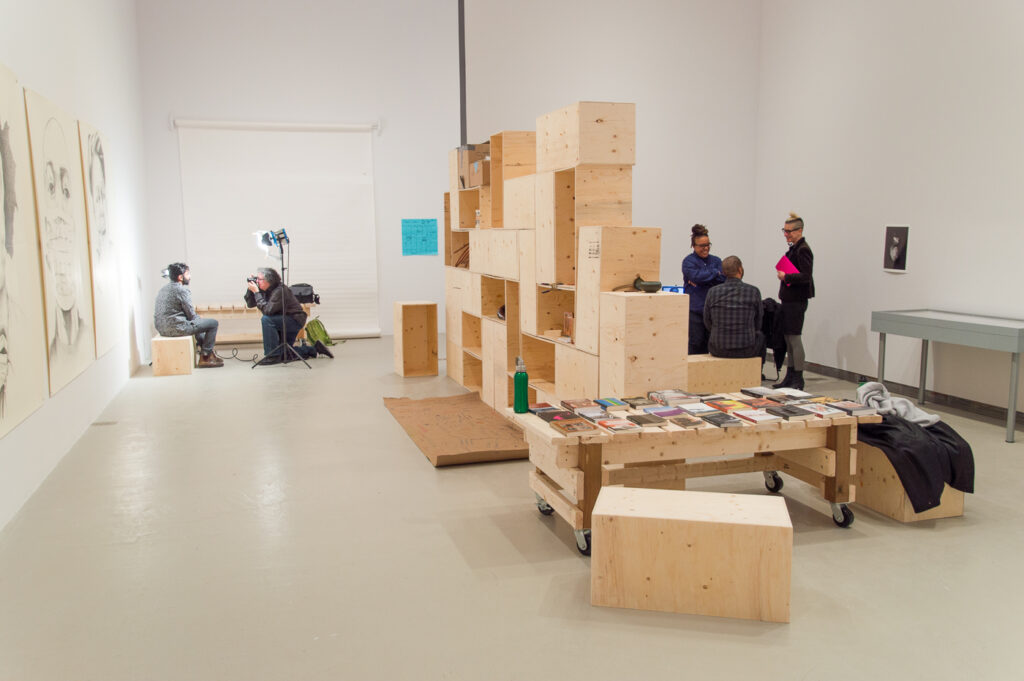 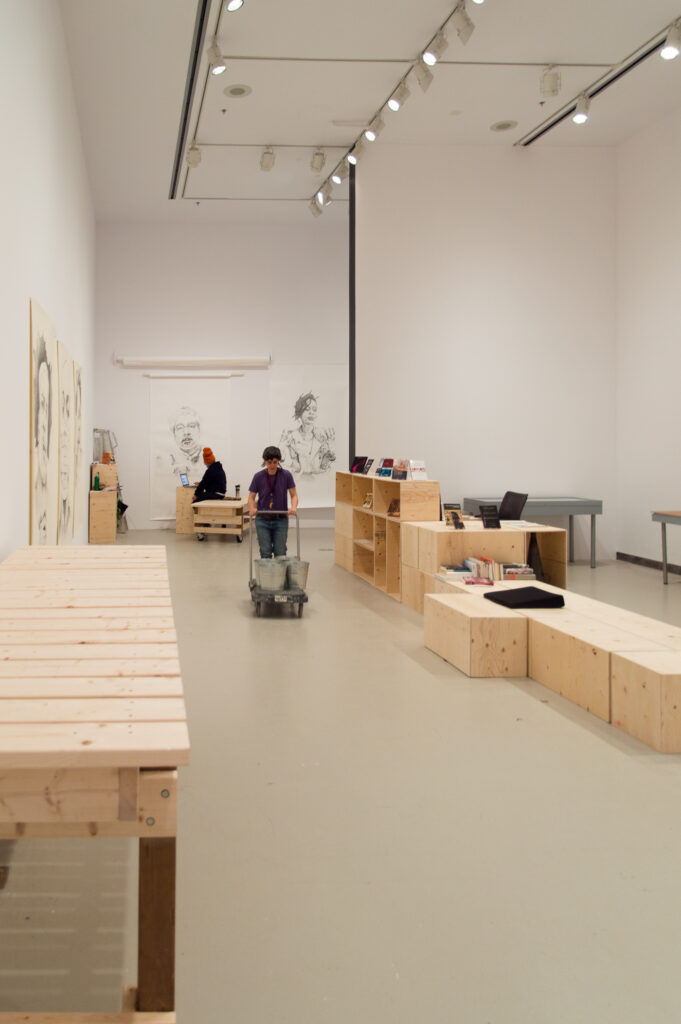